Steven Blane, founder of Sim Shalom, the world’s only online Jewish Universalist synagogue and also a singer-songwriter is heading to Nashville to record an album of his original songs.

The album, which will be produced by highly regarded Christian Music Producer, Billy Smiley will feature many of Blane’s inspirational songs, two of which he will premiere live at this year’s upcoming High Holiday Services at the Bitter End. The recording will take place at the iconic Dark Horse studios in Nashville. 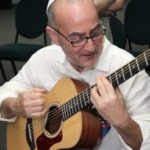 Comfortable in the Alternative/Folk/Indie genres, Blane’s songs reflect his musings on relationships, faith, love and fantasy. “I realize my song’s messages regarding faith are universal- and extend beyond the scope of the Jewish world. So when I met Billy and saw him at work producing music during a previous trip to Nashville, I asked him if he would be interested in producing a Rabbi. Having heard me perform- he was all in!,” says Blane.

Two of the songs, “Mountain” will be performed on Rosh Hashana and “I Confess”, on Yom Kippur. Here is a link to a live acoustic performance of Mountain: https://youtu.be/WdnIA2SpBgM

The album will be released prior to the Jewish New Year- Rosh Hashana 2016.