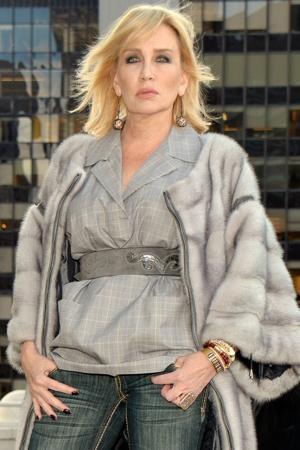 Tobi Rubinstein Schneier is wearing an animal-print hamsa necklace she designed herself to ward off the evil eye, and according to her, it’s working just fine.

Two years after her high-profile rabbi husband, Marc Schneier, was caught in a torrid cheating scandal that became unrelenting tabloid fodder, she is embracing the dawn of a new era.

Her new reality show, “The House of Faith N’ Fashion” — a “trunk show with brains,” she calls it — has her visiting designers’ showrooms and shops, including that of Patricia Field (a personal friend), when it debuts on NBC Nonstop later this month.

Today, on the hosed-down sidewalk outside Field’s Bowery shop, the one-time skid row seems reinvented. And so does Rubinstein Schneier.
“I feel free as a bird these days. I don’t have to answer to anyone anymore — except to myself and God.

“I can’t tell you I didn’t go through hell. But I came out the other side, and redefined myself,” she says with a smile.

She’s not kidding: The sultry 54-year-old became a newly minted rabbi in January. And the self-professed “couture addict” also hopes to launch a House of Faith N’ Fashion line after the first season of the show.

“I’d like to start it off as a luxury line that would go into a Saks, Bergdorf or Neiman’s, yet I do see myself on a shopping network like people I admire, including Rachel Zoe.”

The label, she says, will reflect her own high-low aesthetic. “I can wear a YSL jacket with a $20 pair of jeans.” The Orthodox girl with family in the Bobov religious sect in Borough Park, Brooklyn, has long had a passion for fashion: She’s designed for the Nicole Miller children’s line and Crunch Fitness apparel, among others.

“I live in two worlds — fashion and religious. But I would never just want to be in one, and it doesn’t have to be either/or.”

Still, she’s not afraid to break from tradition; she’s the only one in her family who never wore a sheitel (a head covering for married women), and she wears pants, often shunned in the Orthodox community.

“I was raised to be somebody’s wife — and fashion was a way out for me,” says Rubinstein Schneier, who spent one year at FIT before she wed at age 20, the first of three marriages.

She has a history of breaking the mold: In 2002, she launched the men’s hip-hop clothing line “Chedda,” street slang for “money.”

“It only lasted two seasons. It was ahead of its time, my most glorious failure,” says Rubinstein Schneier. “[It] was like crashing the glass ceiling — for a Jewish woman with my background, it was a big deal at the time.”

And being Wife No. 4 to celebrity rabbi Marc Schneier had its advantages — schmoozing with A-listers, royalty, ambassadors and entertainment moguls the world over. She hobnobbed with Russell Simmons at the Hip-Hop Inaugural Ball, and became the stuff of legend for bestowing ostentatious birthday presents on her husband. (In honor of his 50th, she had a 400-pound endangered Asian lion donated to the Jerusalem Biblical Zoo.)

But it all came crashing down in 2010 when, after four years of marriage, the philandering Orthodox rabbi of the star-studded Hampton Synagogue, where Steven Spielberg is a member, was caught cheating with a decades-younger comely congregant.

“Either you’re in or you’re out. The Hamptons is very much like a high school lunch room,” says Rubinstein Schneier. “If you’re smart, you can float from one clique to another and have a very good season.” But she sounds the warning, too: “You can fall from grace in a New York minute.”

As her marriage to the rabbi dissolved, so too did many of her friendships. “One week in synagogue, people are fighting to sit next to you … and the next week, you’re gone; it’s a horrible feeling,” she says. “I can count on one hand how many people got in touch with me after to see how I was.”

She won’t discuss the details of her divorce settlement; she and Schneier don’t have children together, though Rubinstein Schneier has an 18-year-old daughter, Lola, from her second marriage.

“The Post inspired me to become a rabbi. If I read one more time I was ‘Wife No. 4’ [on Page Six],” she says before trailing off. “I wasn’t going to live my life like that. I enrolled in seminary and decided to become a rabbi. I survived it the way I wanted to survive it … I was no longer the wife of a rabbi — so I became the rabbi!”

Rubinstein Schneier was recently ordained by the Jewish Spiritual Leaders Institute Rabbinical School, which “[trains] liberal Jewish clergy for the modern world.” And she even officiated at a wedding for friends this summer.
“America’s Next Top Model” personality, friend and stylist Nole Marin marvels at her fierceness: “I’ve never seen a rabbi look like that. She’s the most stylish rabbi I know. Even without being a rabbi, she’s one of the most stylish women I know.”

But for Rubinstein Schneier, fashion and religion go hand-in-hand as sources of inspiration.

“No one thinks there’s any faith or spirituality in fashion, but God was actually the original designer,’’ she says. ‘‘He made the most ornate garments ever given — the costume of the high priest and all the jewelry — the most elaborate outfit possible. So I believe clothes can be Godly.”