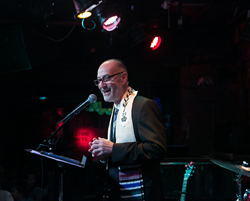 Rabbi Steve Blane began Jewish Spiritual Leaders’ Institute as a pragmatic response to the Jewish Rabbinate and to date JSLI has ordained 150+ Rabbis. Rabbi Blane’s background includes being a singer/songwriter and Cantor in several congregations. He brings his love of music and Conservative Jewish liturgy to fore and began training Cantors in 2016.

Sim Shalom has ordained two (2) Cantors and another two (2) were ordained at a holy ceremony in Stony Point, NY. The two hail from Massachusetts and California respectively. Rabbi Blane is proud to note that another four (4) began studying this year and plan to be ordained next year. The Cantorial programfollows a structured curriculum over the course of two years and students learn Shabbat, High Holiday, weekday and Festival Nusach.

Rabbi Blane studied privately with a well-known Cantor and then led several Conservative congregations as Cantor and ultimately as Rabbi and Spiritual Leader. He continues to pursue his love of music as a singer/songwriter in the Americana genre.